This morning, while randomly trawling through radio stations in the car, I heard a bit of a segment on Radio Rhema (yeah AM I know...).  It was a talk by well known preacher Tak Bhana on a show called 'Running with Fire''.  The essential message was that Christians need to be braver when asking God for 'the big things.''.  He spoke of how people become disheartened when they ask God for something and don't get it, but that we simply need to have more faith and keep asking.  He cited an example of needing an extremely large sum of money - he asked God for it, and there it was.

Now I'm the first person to admire someone for such faith.  And to agree that there are times that we shrink our view of God to such an extent that we might not believe he is capable of what we ask Him for.

But to hear that I just needed to be more faith-full, and to keep asking for bigger, more amazing things?  Well that makes me uncomfortable.  Not because I don't believe God isn't capable of giving our hearts desire.  But because it's all a bit close to the prosperity theology that has been popular of late.

Sure ask God for big things.  Believe that he is able to give them.  But don't think of his as a magician, able to conjure up all that you want, just because you asked for it. 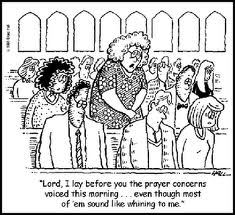 asking an invisible friend to do something and expecting them to do it is what gets some people committed to mental institutions.