Once in a blue moon

Apparently a blue moon happened on the 31 July.

And if the conspiracy theorists are to be believed, 2015, and in particular the August - October period of this year, are going to be...shall we say...tumultuous...for the world.

Well I'm no conspirator, I don't really hold much stock in astrology, and on the Pollyanna scale I usually rate as a 10.5 but  when I look at the last 6 weeks,  all I've got is WHAT THE ACTUAL F**K!!??  Momma told me there'd be days like these but seriously.....

It all began at the start of September, when I glibly remarked to several people that I had the most boring life ever.  Nothing dramatic ever happened you see, at least in a negative way - my life was an oasis of calm where the most drama one might see would be the cat bringing a bird into the lounge for a morning snack...or someone might steal my parking space...or the supermarket would be out of my favourite brand of coffee. 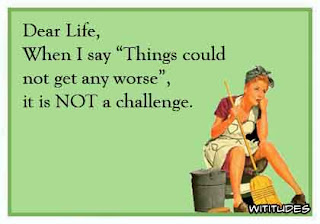 But oh, oh dear, perhaps I tempted fate in making such a proclamation, because literally since that day, the longest list of crazy, random, unrelated, unexplainable and RELENTLESS dramas have taken over life.

Where to begin - could it be the three separate times my car was off the road for days at a time, for different things, including a car crash that wasn't my fault?  Could it be the trip to the after hours Doctor for a seemingly simple sore throat that resulted in diagnosis of two unrelated and completely random illnesses in my children (and a different one again for me)? Could it be that in the space of 90 minutes IN ONE DAY the car broke down (first time), I ran over, and killed, a neighbours cat, and my grandmother died? Or the day I heard that a man I had been very attached to when I was much much younger, had died unexpectedly at 48. The day both my fridge and my washing machine broke down. Or a few days later when a tap broke and I lost an entire tank of hot water before I was able to get it fixed.  The news that there is major repair work required on my house, that is in part due to crappy workmanship, in part to an incorrect council sign off, and in part to faulty product, which is going to cost me in the tens of thousands to repair? The weird movement of random things around my property that no one seems to know about? The friend caught up in domestic violence. The work issues. Oh the work issues. The financial worries that I thought were over are back, they are ba-ack. The other car accident I had in a borrowed car that defied gravity and left me shaken but not stirred. My long wakeful nights worrying about a list of people I have no right to worry about.

Oh I could go on, that is but a taster of it all.  Yes WTAF.....but if you don't laugh you cry, so laugh I will - even though much of it is somewhat hysterical....

But for all those awful crazy things, to hear that  the mother of my sons friend was killed at work, put it right into perspective.  For me, it's a bad run.  For that family it is an absolute tragedy. Perception might be reality and my list is long and arduous, but in comparison I have nothing to complain about.  My rubbish is a long list of just that - rubbish.  It's just a coincidence that it's all happened at once, right?

I heard an expression in a TV show tonight, that I think comes from AA - 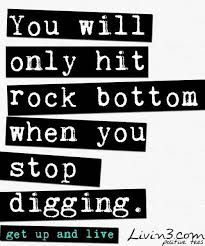 The premise is that the road downward is essentially a 'choice' just in the way that the road upward, or back, is too.  But hang on a cotton pickin minute, I didn't choose any of those things up there - they just happened. Random stupid happened.  And all I have done, in the end, is let life come and me (somehow it seems safer that way).  Maybe when some things happen it is as a result of digging - sure isn't that what i wrote about in my previous post, but sometimes, crap stuff just happens to good people - and it all comes along at once.

So these things happen once in a Blue moon. Crazy season. Whatever it is, I'll take it.  As long as it's over soon please. 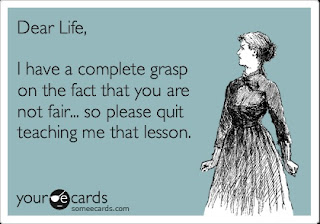 Why I'm now longer living in the Now 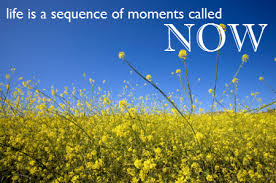 It's become the phenomenon of our time I reckon - to live for the moment, squeeze the living daylights out of every second, and be forever moving forward.

I'd always been a bit envious of people who do this - mainly because my inherent worryworting behaviour is not helpful when it comes to stewing about the past, nor stressing about the future.  And I think there's probably some truth in the cliches that tell us about history and mystery.

I'm all for experiencing life fully - sometimes it's beyond bliss to be captured by a single moment and to want to stay with it and enjoy it (or not).

The electronics that hang about me are constant distractions from the now, that's for sure.  And it's extremely easy for what was to be a quick five minutes looking something up on the interwebs, to turn into an hour or so of mindless surfing.  After all - to live in the now is the perfect foil to boredom and a (dammit let's do it), need for excitement,

But frankly, I think this whole idea to Carpe the fuck out of that Diem has gotten a bit out of control. As humans, we are the sum of our experiences, and so not only is it impossible to leave the past in the past, I reckon it's probably not that healthy. Those memories and experiences shape who we are, every day.  Every damn day.  And the only way to learn is to actually acknowledge that stuff we thought we had so carefully packed up (baggage? hello...I have SO much of that stuff!), or accidentally on purpose 'forgotten' about.

I also believe that careful planning - the weighing of pros and cons, the understanding and commitment to consequence, are also key parts of life.  And the thing with that,  is that living in the now is way too close to avoiding outcomes.  What should be a considered, (current trending term alert), mindful way of living, can so easily become a 'damn the crows' type attitude toward what 'might' happen (could happen/should happen).

And I spend all that time teaching my kids to think about their actions, make plans for their future, remember that what they do now will affect their lives FOREVER and then they hear the 'now' message.  There's nuance, of course there is, but show me a 12 or 18 or 28 or 48 even, year old cortex that really truly gets that.

The now is delicious. The now is about living in the moment, reminding oneself that at any moment we could be dead.  And that's true - sure didn't one of my friends go off to work last Saturday and never come home.

But does living in the now mean we should not respect our past, or our future, nor acknowledge all that has happened that has made us who we are? I think not.  Bury them as deep as they need to go, but memories are there forever, and mine have made me the person I am today.  It's a long arduous journey to move through them  - or at least make them portable enough to move with me (and that's kind of the point), but my fear is that to proclaim and model  to live 'in the moment' will not respect those formative experiences, nor allow me space to plan my future.

For me, the now is the sum of its parts.  The good the bad and the ugly, all of which need acknowledgement and respect.  Does that mean 'hanging on' to the past and fearing for the future? Not at all - but it does mean being mindful of life in all tenses,  respecting that everything I did, and do, has a consequence that will reach far far beyond the here and now.