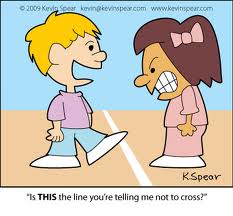 I've never been very good with boundaries.
Not that I'm one for pushing them, oh no, far from it.  But I do seem to have a special gift for letting others trample over mine.
I think I have an idea why too, and it's all to do with Gary Chapman.  I've talked before of his ideas about 'love languages' and how i believe that we can give in one language but prefer to receive in another.
I did his checklist again recently and my NO 1 language for receiving 'love'is words of affirmation.  I was kind of surprised by this - I mean, I thought I would much rather have had a cuddle....or a box of chocolates:).  But, there it is, and on reflection, I think it's probably accurate. (And it's also accurate that I'm not very good at giving those words back - much easier to offer a cuddle or a box of chocolates!)
So, I think that maybe this is related to my underdeveloped skill's of maintaining boundaries.
Let me explain:
I'm not one who is used to getting compliments.  I find upward feedback, appraisals, performance reviews, and so on, excruciating.  although that's mainly because I dread the 'formative feedback'(or whatever other rubbish title we use to mask criticism).  You see, as much as I love getting words of affirmation, I loathe getting criticised.  Nothing makes me feel crappier than a casually tossed critique of my clothes/cooking/personality/parenting style.  And so obviously, nothing makes me sparkle more than a positive comment, a warm remark, a generous compliment.  Note carefully - nowhere is the word honest mentioned here.  Why? because I am, frankly, a bit gullible....I like those affirmations so much I have a terrible habit of tending to overlook their credibility or authenticity.  and in the same way that those unkind words can reduce me to a shiver, the kind ones can make me excuse or rationalise all kinds of behaviours!
Now, I'm not saying for a minute that I think people are switched on to this, and deliberately try to praise others for ill gotten gains.  I think most of us are genuine when we say good things about another.
I also don't think that putting up deliberate roadblocks is good either - way to easy to become cynical that way!
But, it's just way too easy to hear some good words, bask in the warmth of them, and then as a result see one's boundaries melt away into a murky puddle of good intention and vague regret.
How do you maintain boundaries? and what tempts you to push them - or let others over them?
Posted by susan at 7/24/2011 02:10:00 pm

Hmm, as far as positive comments go, I find it difficult to receive them, getting better at them and of giving them, making an honest positive comment. Not something I think of too much, as to me they arent that important.
Negative comments, I take them and digest them, thinking about the context, the spirit in which they were said, and if it is a valid comment, if not toss it on the pile....

i guess words of affirmation aren't your primary love language then aye!

Acts of service is mine. I'm horrible at appraisals and reviews, too.