I am lucky enough to be partnered with someone for whom integrity is one of his most valued traits.  It's something we share actually - the importance of doing on the outside what you feel on the inside.  It's led to some interesting conversations about situations we've seen, experienced and (obviously) have strong opinions about.

Integrity is an odd thing.  It's supposed to be a positive virtue right?  But it comes at such cost. Sometimes it means simply being challenged, (or challenging the actions and behaviours of someone else), at other times it means having to step out of a comfort zone, and occasionally it results in an absolute standoff where, whatever the outcome, there is going to be one ''winner'' and one ''loser''

It would be nice to think that justice always triumphs - that those people who act in an unscrupulous manner, or without regard to others...or even just without thought or care, would be held accountable for their actions.  It would also be nice to think that anyone who acts with the utmost integrity - even it that means being the very person holding another accountable - would not be maligned for such action.

But, as it turns out, this is not always the case.  In fact, I'd say it hardly ever is.  I have a friend who is affectionately described as ''always landing butter side up''.  I think that's a brilliant description - not just for that person (who is also, by the way, someone of high integrity).  My issue is with the ones that land butter-side up, time after time, despite leaving a trail of destruction in their wake, including, often, the people who chose not to compromise their integrity and didn't follow the maelstrom.

The reality it would seem, is that in the short term at least (and in my experience often the long), ones actions on this earth, whatever their motivation, process and outcome, have little bearing on the success, or lack thereof, of the unscrupulous.

Sure, we can use trite remarks like ''they'll get their come uppance'', or ''what goes round comes round'', but...really?  I accept that consequences really can suck.  And never is this more true that for the whistle blowers, the outers, and the uncompromising.  Because it's those people who end up with an ever decreasing circle of friends, or in terrible health, or no career prospects.

I find myself saying, more and more often: It's not fair!  I know it's a ridiculous statement - life isn't fair, I think we've all figured that out.  But it's true isn't it? Doesn't actually matter what your standards are, how strong your ''morals'' might be, or how strongly you believe in the triumph of good.  Doesn't matter how well you sleep at night because you did the right thing, Integrity, it would seem, is not necessarily the right way to win friends and influence people, after all. 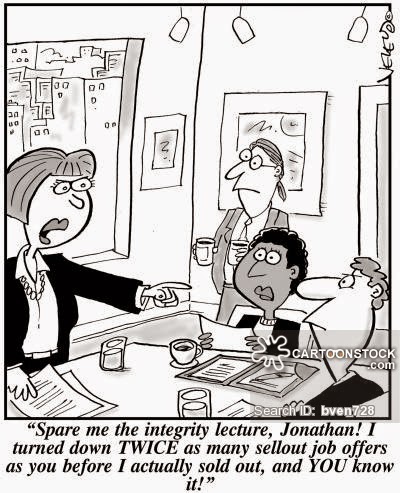